Around the glass and bronze entry to the Griffith Observatory, the building’s concrete exterior is inlayed with a series of turning patterns and stripes. In 2015, Rosha Yaghmai recreated a fragment of this façade, making her own patterned doorway to the stars on a smaller, single-body scale. These portals (Gates) were finished smooth with various pigments and products, including silver oxide, copper, Miracle-Gro®, and Aztec Secret bentonite clay. She installed each flush against the wall at Kayne Griffin Corcoran gallery with a rust covered pool chair placed nearby. Together they implied the body in various postures and against architectures—traveling between realms, or reclining. Since this scene, Yaghmai’s list of hallucinatory motifs and materials has steadily grown. For her solo exhibition, Miraclegrow, at the CCA Wattis Institute (running January 15–March 30, 2019), she turns from tableau mode to full installation, fashioning a tiled room from the perspective of a spider. I was curious about this shift. We caught up over the phone in the weeks prior to the exhibition’s opening.

Laura Brown: Could you describe what you’re working on for Miraclegrow?

Rosha Yaghmai: I’m remaking a bathroom floor. Zooming into one little section of a floor, from observation. I saw a spider on my bathroom floor trying to crawl on my jumpsuit. I pulled the clothing away and watched the spider not totally understand what happened. It perceived the moment in some way I can’t comprehend. And so I wanted to zoom into its existence and think, what does the spider see? I can’t imagine.

LB: There’s a drastic shift in the entire landscape for that small animal.

RY: That must be so much a part of its daily existence. This idea of a weird, disappeared ghost landscape. And the spider is left perched next to these black tiles, so it’s seeing some kind of reflection, potentially.

For the Wattis show, I’ve created a faux floor that’s tile and grout, which acts as the pedestal for a 17-foot hair that is made from a rusty pipe. There are eight black tile panels, where the wall meets the floor. I’ve painted a very loose landscape onto the panels. It’s a backdrop for the hair but also acts as a semi-reflective surface, reflecting another indeterminate landscape of the room. There’s also a bug zapper. It reflects and follows you like a charged little spot of purple. 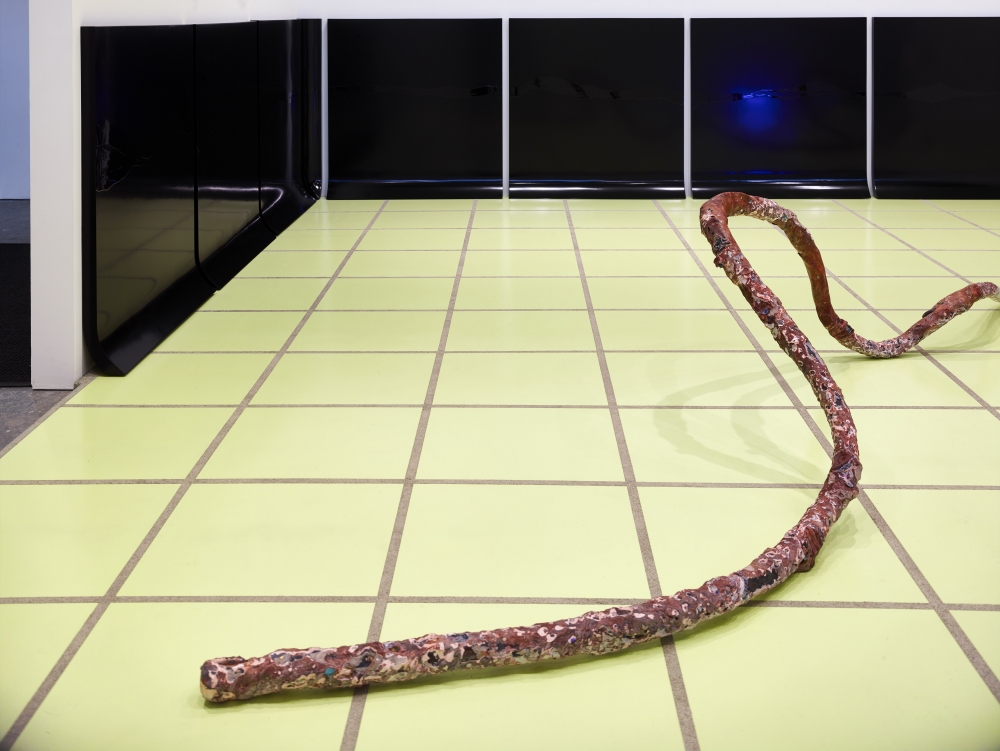 RY: I think it’s just about a very literal scale shift. Your surroundings just grew, like you’re Alice in Wonderland. Since my show Easy Journey to Other Planets (in 2015), I’ve been using Miracle-Gro®, copper, mud masks, and so on as pigments. Miracle-Gro® is a chemical (a fertilizer) that you put on a living thing to change its properties. In the back of my mind I’m always thinking of psychedelics.

LB: How were chemicals involved in the process of making this work?

RY: A lot of the time I’m drawn to a certain material and I know it’s going to provide me some limitations. Generally, I’ll work with something liquid that becomes solid. And so for the hair, with the pipe as the armature, I coated it for a couple months until it resembled sedimentary stone. It’s encrusted with patches, blue chunks of Miracle-Gro® made with copper and plasters. There’s no silicone on the sculpture, but I started with casting my body in silicone. I used rust oxide and all these dry earth pigments, putting them down with my body casts. There’s also melted plastics—shampoo bottles and laundry bottles. There’s nail polish, and Aztec Secret bentonite clay, limestone, tons of sand. At this point, the pipe is so covered, it’s not a visible part of the work anymore. It’s a sort of inner passage.

LB: Casting has been a large part of your practice.

RY: Yet I’ve never actually cast my body before. I keep returning to the resins and silicones. In The Courtyard (2017), the silicones were a facade that you couldn’t enter. Or the cast Gates (2015), they imply a portal, but you can’t enter. I seem to always be making doorways, pass-throughs, windows, screens. I think most of my work is some kind of screen. This whole show was supposed to be silicones, and then I changed it. I was actually dreaming about it last night. For me, the silicones are always a stand-in for the body. Just the weight of it, the properties of it.

LB: Is the relation of silicone to the body a prosthetic one?

RY: I actually don’t think of it so much as a prosthetic. I’m coming from Los Angeles, Hollywood, so it’s more about special effects or adopting another body. In The Courtyard, I really wanted to find a way to use that body on a more architectural scale, and to project the body into certain architectures. That came from observing façades around the city at night when I couldn’t sleep. And from this desire to connect to other ways of living, or other lives. So much of my work is about the pain of existing in one body, or one life.

LB: Where did the pipes originate from?

RY: A few years ago, I went to my friend’s house and she was redoing the gas lines under her house because there was a leak. There were all these pipes gnarled and stacked in the corner of her yard. I saw them and immediately I recognized them as an unearthed system of connection and communication, altered and broken. I wanted to cut into them and insert these lenses. The lenses were from my father and a lot of the men in my family, over many decades and locations. They all have bad eyes. I wanted to further fracture the line, to blend perspectives, alter sights, or layer visions. I think the lenses are a really intimate part of the body. You are looking through someone else’s corrected eyes.

With this new work, the pipe is a blown-up hair on the tiles. A hair is its own pass-through of your life, your DNA, and a record of the chemicals on your body. It’s a map or a timeline of your experiences in the stretch of however many years that hair was in your head. So for me it just made sense to use the pipe to make it.

It’s so much about alienation or foreignness. Not so much the image of the Californian psychedelic experience, being one with nature—instead a window into how disconnected you are, how much you don’t understand. You can get into a little wormhole with one object, and then another object doesn’t appeal to you at all. For me, it’s really tapping into some weird, trapped knowledge. 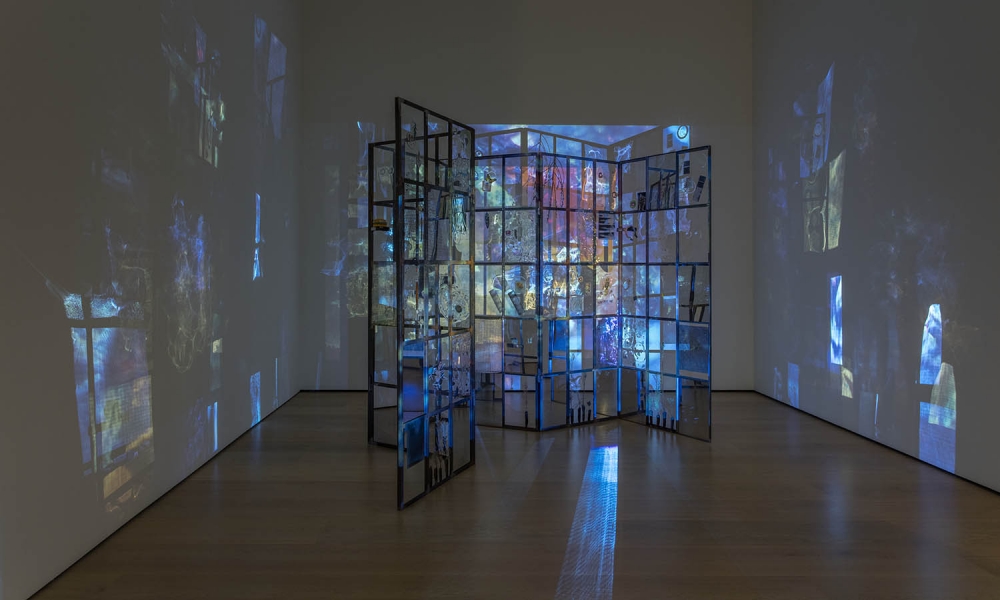 LB: You’ve mentioned psychedelics. There’s this connection between the sense of tracing you’re describing, including with your family, and then the hallucinogenic experience— entering into a psychedelic state to reach this other, longer, sedimentary history.

RY: Yes. It’s so much about alienation or foreignness. Not so much the image of the Californian psychedelic experience, being one with nature—instead a window into how disconnected you are, how much you don’t understand. You can get into a little wormhole with one object, and then another object doesn’t appeal to you at all. For me, it’s really tapping into some weird, trapped knowledge.

For example, with the benches in The Courtyard, I was responding to a ’90s beach experience that I can remember, again just from being outside at night. When I was making that show I found a suitcase. My dad’s an architect but he owned a marble company for a long time, and I was looking through his drawings and, sure enough, there was a whole line of furniture that looked exactly like the benches I was making.

LB: All these apparently inherent connections. There seems to be a certain embeddedness to your materials.

RY: It’s a strange bleeding or seepage of information. This sort of slow drip, digging out my understanding of this world. I’m realizing my work is very personal. The process is totally entangled with me figuring out what I’m drawn to and why. And so there are motifs that come back, like windows and doors and draped fabric. A mysterious under-life or psyche.

I’m realizing how removed from my own cultures I am. My father’s from the Middle East. He’s from Iran and perhaps because it was a traumatic exit for most Iranians who came to this country, and everyone deals with it in a different way, I think through the process of assimilation, or migration, that part of my DNA, my absorbed culture, is such a mystery to me. There are so many ways I could research or look into the facts and I just don’t have any interest in that, because I feel that figuring it out in-process is really generative. I think misunderstanding is a very generative thing.

That’s the crux of the installation I made for the Hammer’s Made in L.A. 2018. I had these photos and slides that my father made. I finally talked to him about them. When he first immigrated and he was in Berkeley, he took a photo class and started making slides. He got chunks of glass from the Coca-Cola factory up there and was using the television and other light sources to make these psychedelic images. I’d been making slides too.

LB: Does this familial connection appear in Miraclegrow?

RY: There is a copper tube coming out of the wall. It’s a sound piece that consists of my brother Amir and me. It sounds very strange. We remade the Three’s Company jingle, and put it together with this Iranian song about a river. It’s not very clear; it’s very muffled. So it implies this other possible apartment or unreachable existence, just on the other side of the wall.

“Roodkhooneha” or “River Song” is originally sung by Ramesh. It’s about how she wants to become another being, like a fish, and swim in the river, then become an ocean. Reincarnation. It tracks her small existence into a greater one. It’s about her desire; it’s not about the reality. 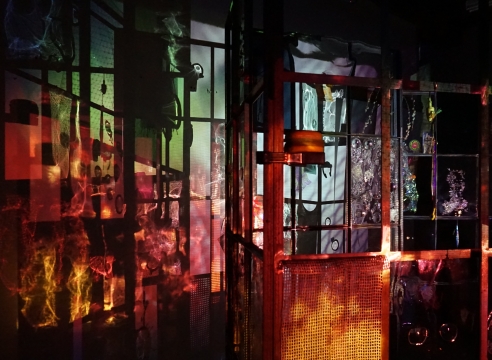